Today, the sixteenth of Sivan, was my father’s yahrzeit. All day, I have been thinking about what he missed for these past 29 years.

He never witnessed so many changes in me, never saw who I have become. He never met two of his four grandchildren, and never experienced a milestone with them past Noah’s second birthday. His baby granddaughter is now expecting a baby of her own. I know that he would have relished it all.

Like many of us, on such an anniversary, I think about what my parents have missed, but this year, my father’s yahrzeit has been a particularly hard day.

When I examined my deep sadness, I recognized that thinking about what he has missed is just a shield against thinking about all that I have missed. And what I am missing today is the dad who listened patiently to my questions about injustice in the world. It’s the dad who could wisely help me trace historical factors that led to the situations that are plaguing society. It’s the dad who would let me cry and comfort me for the anguish of suffering people in the world. My father was a progressive liberal in all of his thinking, but he was never an activist. Family dinner table conversations were about family members, television shows and the Red Sox. We did not often talk about current events and never debated politics. There were no cries for taking action against injustice, no stamping of postcards, no traveling miles to rallies and protests. But in the quiet of our den, I would lean on my dad’s shoulder as he read the Portland Press Herald in the morning or the Evening Express at night, and he was my tutor. He guided me to formulating ideas about issues in the world and to recognizing my agency to effect change.

Today, in the midst of these days filled with anguish and protest, I missed that quiet den and those talks. But when I tried to retrace my father’s role in my activist soul, I could not do it. My memory for actual conversations is too undependable, even the tenor of his voice flees from my remembrance. There are too many questions I never asked, stories I do not know, descriptions of emotion I never heard. My father’s inner life, it seemed to me all day today, is an irreplaceable treasure.

And then suddenly, earlier this evening, a memory came to me, like the answer to an unasked prayer. From out of the blue, I remembered, in absolute detail, a conversation with my dad when I was disappointed about something (no doubt inconsequential) in high school. I have no memory of my own particulars, but I remember everything my dad told me about his senior prom. “I went to my senior prom with Charles Richardson. Charlie was the only black student at Portland High School in 1947. In fact, the Richardson family was the only black family in all of Portland.” On one level this information is certainly of interest, that my dad had no date and attended a dance with a fellow male student. At a deeper level, I feel like I recovered this memory as a salve for my hurting heart. My dad rarely spoke about his childhood. But of all the stories my father did not tell me, this is a story fragment that he did share.

And I accept it. I accept this story with its mysterious details and take it in as my legacy from my dad. He showed up at his prom with a young black man as his date. In Portland, Maine. In 1947. If the legacy was not overt, I can still find it there when I look closely. The only question now is what will I do with his legacy?

In this time of upheaval and protest, I dedicate myself to ongoing education, to learn more about historical, institutional racism, to move beyond understanding myself as a racist to becoming an anti-racist. I pledge to continue engaging in conversations with those from whom I can learn and with those I can teach.

In this month of June, Pride Month, I dedicate myself to ongoing education, to learn more about the lives of those who still fear sharing with the world who they are, to move beyond being an ally to becoming an activist. 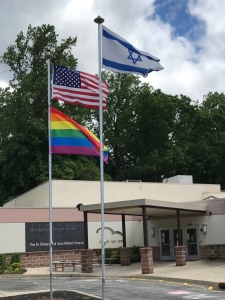 It does not matter if I am making more of my father’s story than ever existed in context. I have decided to consider it the legacy left me by my father. A simple two-sentence story bearing two important facts. Dad went to the prom with another boy and that boy was black.

For some of us, the legacy for social justice is clear. Others of us, like me, must go searching and maybe even make it up a little. But I know that I had a dad who taught me to value the vulnerable because he himself was. He taught me to find strength in what appears to be weakness because that is what he did to survive. My father left me the key to a treasure trove of important values in a two-sentence fragment of a story. I’ll take it.

8 responses to “A Two-Sentence Legacy”