Making a Minyan because of Kindness

My teacher, former Chancellor of the Jewish Theological Seminary, Dr. Ismar Schorsch, likes to say that the requirement of a minyan is the secret of Jewish survival throughout the centuries of dispersion.

Every week in News You Need to Know, we remind you to fulfill your obligation to attend a morning or evening minyan. 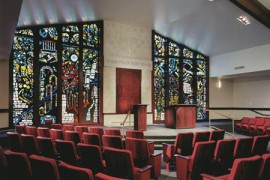 Every OJC member is assigned a number which represents the day of the month that one is required to attend the minyan at the synagogue.

With regard to a prayer quorum, we singularly use the language of obligation and responsibility. On the one hand, these words are appropriate. Gathering ten to say prayers that praise God’s name publicly is a mitzvah, a commandment of Judaism. On the other hand, perhaps  we should instead employ the language of loving kindness. Gathering for a minyan provides a setting for chesed (loving kindness). How so? One of the most painful elements of modern life is a sense of isolation and loneliness which it can foster. A minyan just might be an antidote. I formulated this idea over the past week as I davened with different kinds of OJC minyanim.

Last Tuesday morning, ten of us gathered at Esplanade on the Palisades to make a minyan for Estelle Sollish, our much loved congregant who recently moved there. Bringing the minyan to her was a sign of devotion and our desire to ease her transition to a new living situation.

On Thursday morning as we stood at the Torah, one of the people of the minyan added the name of a loved one during the prayer for healing. The tears in his eyes bespoke a concern and worry that he was not yet able to articulate. But the minyan allowed him a safe space to be vulnerable.

On Saturday afternoon I chanted the words of the memorial prayer on behalf of a congregant’s mother whose twentieth yahrzeit falls this week. As I prayed that her mother’s neshama would have an aliyah, I saw that the gathering of fellow congregants gave her permission to express her grief even after all these years.

Last night there was a minyan at a shivah house. As the family gathered close for comfort, the arrival of fellow congregants brought the sure sense that they were not alone.

Admitting what we need, asking for help, showing our vulnerability — can lead us out of isolation and into community. A twenty-minute prayer service can accomplish all that. Mark Nepo has written: “As water fills a hole and as light fills the dark, kindness wraps around what is soft, if what is soft can be seen.” It is indeed the obligation of a community to create minyanim so that people can pray together. I have no doubt that Dr. Schorsh is correct in his estimation that the minyan has kept the Jewish people together. But perhaps the most important reason for a minyan is that gathering together allows others to be vulnerable, to know one another, to seek a path away from loneliness. Gathering to be one of ten allows us to be our very best selves through this act of loving kindness.

This past week, the Jewish Federation and Foundation of Rockland issued a statement, which we shared to our synagogue community, in response to the recent publication of the Movement for Black Lives’ platform. I had a feeling that the statement would elicit a range of responses, and my sense was rewarded with three messages, each very different in its perspective. With each passing day this week, following social media and the many (mostly Jewish) media outlets, I gained several more perspectives in response to the platform. I have tried to find my personal response inside these many perspectives, but none entirely gives voice to exactly how I feel. So perhaps, if I can lay out my responses for you, you can come to a conclusion of your own. I can, however, offer you from the outset one ultimate conclusion I have reached: if you truly care about where to stand on this issue, you must dive in deeply. Wading through the waters from the surface will only serve to reinforce preconceived notions and biases, in which case you might as well not even bother taking the swim.

To summarize the issue in its most basic terms, the published platform of the Movement for Black Lives (note: they are a subset of organizations affiliated with the Black Lives Matter movement, but they are NOT synonymous!), in an extensive and far-reaching statement of “policy demands for Black power, freedom and justice,” includes a section on investment and divestment: “We demand investments in the education, health and safety of Black people, instead of investments in the criminalizing, caging, and harming of Black people. We want investments in Black communities, determined by Black communities, and divestment from exploitative forces including prisons, fossil fuels, police, surveillance and exploitative corporations.” Among the many detailed demands put forth in this section, in calling for a decrease in military spending and aid, the platform singles out America’s complicity with Israel “in the genocide taking place against the Palestinian people.” The platform further states that “Israel is an apartheid state with over 50 laws on the books that sanction discrimination against the Palestinian people.”

So here is where the conversation gets tricky, especially in a community where so many people have pledged support for the Black Lives Matter effort but who also care about protecting Israel’s interests against deligitimization and the growing BDS (Boycott, Sanction and Divest) movement.

“We” are not mutually exclusive. “We” as a Jewish community are constituted by individuals of many colors, black, white, and others; we are Jewish and non-Jewish; we are liberal and conservative. As such, we need to recognize that when issues such as this one arise, some of us may be affected differently than others. Our internal response is as important as how we respond to the outside world. Unified or not, that response needs to reflect an understanding of, and be sensitive to, the diversity that “we” represent. Hopefully, our response can always reflect the unity of our shared values. If the 9th of Av, whose fast is observed Saturday night into Sunday, is to teach us anything, it should at least teach us that is who we are.