Unite the Fight (against Hate) 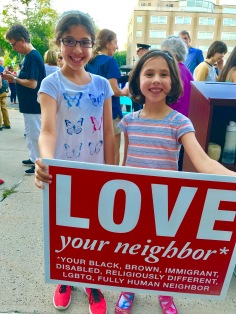 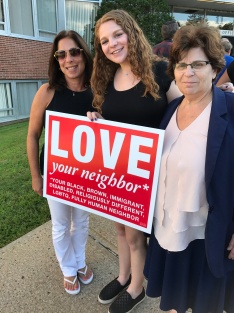 Earlier this evening, more than two hundred people gathered at the Allison-Parris County Office Building in New City to speak out against the rise in hateful action and rhetoric. After the terror of Neo-Nazi white supremacists spewing anti-Semitic, racist and xenophobic speech in Charlottesville, VA, Rockland Pride Center joined forces with the Jewish and African American communities to stand up for acceptance and understanding. You can read more on Facebook and watch a video of the rally at Unite the Fight, #UnitethefightRockland. 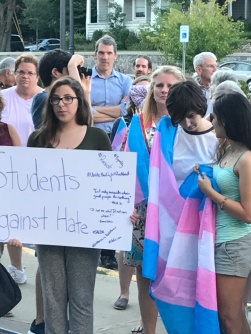 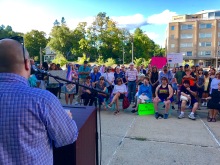 I share with you here, in part, my words in the hope that it will motivate all of us to take action in some large or small way, every day.

When I was a kid of twelve or thirteen, some of my friends got into a big fight, choosing up sides and being mean to each other. I remember growing so tired of the whole situation and complaining to my dad, “I just don’t want to deal with it anymore!”

My dad answered, “Tough. You have to deal with it… because they are your friends and they matter.”

I’ve gotten a little bit older since then, and my circle of concern has gotten a bit broader. Today, not just my friends and family matter. All people, because we are all created in God’s image, matter. But some days, I really want to say, “I just don’t want to deal with it anymore!”

That’s when I hear my dad’s voice reminding me: You have to deal with it, because people matter.

We have gathered on an auspicious day, the first day of the new month of Elul, when Jewish people look forward to the New Year and attempt to return to our best selves in a process called teshuva, repentance. We cannot do it all at once. But each of us can effect change one degree at a time.

This hopeful thought can allow us to say, “If we are able to change ourselves by one degree, then all of us together can change the direction of our country with that same one degree of change.

Consider the fact that we all showed up here in New City today. Instead of turning on our neighbors, instead of finding differences, we are committed to identifying all that brings us together.

We have gathered for freedom, democracy, and our trust in justice. This week in the Torah portion we read:‏ ‏צדק צדק תרדוף

Justice, justice you shall pursue. The way that we pursue justice now is by rallying together and uniting the fight.

When Brooke Malloy, Executive Director of the Rockland Pride Center, asked me to speak tonight, she suggested that I share how the Jewish community is feeling now after the events of Charlottesville a week and a half ago. I can’t speak for the Jewish community as a whole, but I can tell you how I am feeling. My response is encapsulated in the story of the president of the Charlottesville synagogue who stood on the front porch with two hired guards while white supremacists and neo-Nazis walked by shouting, “There’s the synagogue. Let’s burn it down!” and “Jews will not replace us!” As a congregational rabbi, nothing steals my breath as much as the fact that fifty people inside, finishing their Shabbat morning prayers, were told to sneak out the back door of their synagogue for their safety. In the United States of America.

As I thought about what Brooke asked me to do here, however, I realized that sharing my story is only the beginning. My work against hate must continue by asking questions instead of telling. What does this violence and hatred mean to you as a gay person? As an African-American? an Hispanic or Asian or a person who came from Haiti or Dominican Republic?

Our task is to prove that love truly is stronger than hatred despite the evidence of the past weeks. Love arises from knowing the other. Rabbi Jonathan Sacks has written: “The test of faith is whether I can make space for difference. Can I recognize God’s image in someone who is not in my image, whose language, faith, ideal, are different from mine? If I cannot, then I have made God in my image instead of allowing God to remake me in His.”

Let me return to the idea of one degree of change. As Rabbi Scheff taught in his sermon this past Shabbat, we could create change if all of us dedicate ourselves to get to know one new person every day, a person we do not know, a person who might look different from us. Try looking someone in the eyes who is in your office or in your class or at the store where you shop… someone you have never spoken with before. Say hello. Tell them who you are. Ask them who they are. And let us change the world together one degree at a time.

Because love is stronger than hate.

The call for moral leadership

As this Hebrew month of Av draws to a close in the week ahead, leading us into the reflective month of Elul, I am reminded of a teaching by Rabbi Abraham Isaac Kook, the first Ashkenazic chief rabbi of pre-state Israel: “If we were destroyed, and the world with us, due to baseless hatred – sinat chinam, then we shall rebuild ourselves, and the world with us, with baseless love — ahavat chinam” (Orot HaKodesh vol. III, p. 324). The destruction to which Rav Kook refers is that of the Holy Temple; but his teaching is as equally valid today as we experience again and again the destructive force of baseless hatred all around us. 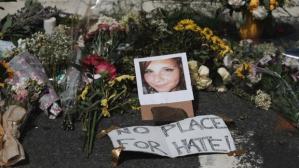 Flowers and a photo of car ramming victim Heather Heyer lie at a makeshift memorial in Charlottesville, Virginia, August 13, 2017.

These times demand moral leadership. The actions of neo-Nazis and white supremacy groups in Charlottesville–marching with torches, toting guns, chanting hate-filled slogans, intimidating Shabbat worshippers, and ultimately inciting deaths and injuries—or anywhere else, for that matter, cannot be countenanced without a response. In the moment, we cannot afford to be bystanders, though we are not required to put ourselves in harm’s way; in the aftermath, we call for moral leadership. We demand swift and unequivocal condemnation from those elected or appointed to positions of power. Over the past few days, we have read many such statements from organizations and individuals representing our communities. Frankly, I am underwhelmed by all of them.

Statements are important; but they are nothing compared to actions. Of course, we should call out—or expect our leaders to call out—that which we find despicable, abhorrent and unacceptable. But how have we truly changed our world in relying on someone else to speak what we are feeling?

Moral leadership must indeed be demanded; Judaism, however, dictates that we demand it of ourselves. We must be the moral leaders of our day; others may speak for us, but only you and I, individually, can change the landscape. And Judaism tells us how in this week’s reading of R’eih: “Do what is right and good in the eyes of God.” Feed the poor, care for the stranger, let the land regenerate, show gratitude for what you have, don’t take time for granted. Love (the verb).

Love. We’ve been reading all about love in the Torah weekly throughout this month of Av. “Love the Lord your God with all your heart, with all your soul, with all your essence.” “Love the stranger.” In response, I commonly hear expressed the struggle with the notion of being “commanded” to love. How can love be commanded?

If I had to define “love” in the context of what the Torah tells us, it would be the feeling we experience when we give to another at our own expense. The Torah wants us to serve the Other–and others–through our choices and with a generous spirit. (A moral leader is defined typically as a leader whose purpose is to serve, as opposed to be followed.) But we aren’t born with that desire to love. We are taught how to give love by being loved and by loving. Love may be an emotion, but it is also learned by experiences and actions.

“But hate is stronger than love,” I hear. My response: Hate is taught, just as love is taught. Perhaps hate is taught more easily, because hate appeals to our base instinct of self-preservation. Teaching love through our actions demands self-sacrifice, vulnerability and risk-taking. Teaching love means overcoming our reticence, our fear of the stranger, our complacency.

Moral leadership means accepting these challenges for ourselves, and not giving in to insecurity, fear and despair. Moral leadership means embracing and living by the notion that there is a shared code of conduct or set of values, that calls upon us to serve one another and “do what is right and good.” Moral leadership is the constant and intentional endeavor to behave morally and to love.

Some of you struggle with the idea that, as Jews, it is our mission (calling? obligation? command? responsibility? — call it what you wish!) to pursue love in the world, just as we are taught to pursue justice or peace. Love needs to be practiced, exercised and cultivated, just like any other discipline, muscle or character trait. And the more we love, the easier it gets. Trite? Perhaps. But when was the last time you went about your day consciously choosing to give love beyond your friends and family circle? To your neighbor? To a stranger? Try it, and you will soon discover that love is stronger than hate.

What does God/Judaism want of us? To live with a consciousness of our connection to others that guides our choices and our behavior. This is what God hopes will shape the kind of love we experience and bring into the world, the kind of moral leadership you and I provide for the world of tomorrow.