Forward March… and then…

I offer the words of this post just as I offered the words of my sermon this past Shabbat: as a prayer. Shabbat Parashat Sh’mot was the day after the inauguration of the 45th president and on the day of the Women’s March on Washington. I began with an intention from a poem by Neshama Carlebach written for this past Shabbat: “May we sing and pray with all that we are, loud enough for the whole world to hear, but soft enough to hear the Angels join us.” Writing words both loud and soft enough requires that I write with humility but also with confidence. Words offered with heartfelt integrity have the potential to be unifying and healing.

There are also those reading these words who believe that perhaps Washington needs a bit of a shake up and that something good could happen from a little less business as usual. If you are one who is optimistic about our new president, I am writing for you too.

Because regardless of how we voted, the thing that unites all of us is a belief in acceptance, tolerance, and protection of the vulnerable among us.

Twenty-five members of my extended family marched in New York City on Saturday, from my five-year old nephew to my mother-in-law’s best friend who is in her eighties. 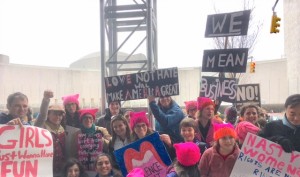 Many OJC congregants marched in Washington and in New York. Many marchers were gathered by organizations with which I am affiliated: National Council of Jewish Women, American Jewish World Service, Planned Parenthood, Hazon, National Organization of Women (NOW), and National Association of Social Workers. In sum, there were more than 600 marches around the world, on every continent. Estimates suggest that there were one million five hundred thousand marchers world-wide.

There is a difference between a march and a protest: one moves forward, the other pushes back.

I shared with my congregation the Women’s March Statement of Principles; ideals to make us a great nation, not to devolve into anger. https://www.womensmarch.com/principles/ The Mission Statement of the March explains that when we walk together, we recognize that our vibrant, diverse communities are the strength of our country. Defending the most marginalized among us is defending all of us. To me, these ideas sound a lot like Jewish values of protecting the widow, orphan and stranger among us.

I asked my sister-in-law Rebecca to share with me why she organized our family and then took a train from Boston to march together down Fifth Avenue. She wrote that she was marching to support women and women’s rights, but not just for women. By marching, she wrote: “I am being visible, making a declaration, being heard. All humans’ rights and dignity matter to me and that is why I felt compelled to do something more active and visible this year. I don’t want to remain silent about something that really matters.” 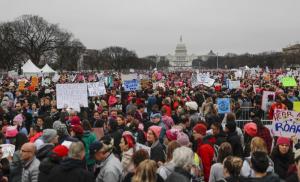 Ideas about the march connect powerfully to the Torah portion we read this past Shabbat. In Sh’mot, we begin to hear the story of Moshe who ran out of Egypt to Midian and then walked back in to take his people out, to take the Israelite slaves on a walk toward redemption. Moshe is certainly the hero of the entire book, but a counter narrative exists just below the surface, the story of five heroines who put the Exodus into motion. (Read more about these women in Sh’mot Chapter 1:15 through 2:10.)

Midwives Shifra and Puah are ordered by Pharaoh to kill newborn Israelite boys but they refuse to follow through. In their refusal to obey, they teach that there are moral limits to power and serve as models of civil disobedience.

Yocheved gives birth to a baby boy. Seeing in him beauty and promise (as all mothers see in their children), she refuses to throw him in the Nile. Her actions to hide her baby show bravery and resilience. Placing her child in a basket on the river shows a stubborn refusal to relent in the face of an unfair fate.

Miriam, who later gains the appellation of Prophetess, runs along the side of the river to make sure her baby brother survives. She has the chutzpah to approach the daughter of the Pharaoh and offer a nursemaid, her mother, for the baby drawn from the Nile by the princess. She refuses to be helpless in a hopeless situation.

Bat-Paro, the daughter of Pharaoh, is perhaps the most courageous of all these women. When she opens the tiny basket and takes the baby to be her own, she is showing disobedience toward her father, the very one who decreed the infanticide. She knew who that baby was, yet still she saved its life. A midrash imagines God speaking to Bat-Paro, “Moses was not your son yet you called him your son. You are not my daughter but I shall call you my daughter.” In rabbinic tradition, she is one of the few characters of the Torah who is so righteous that she entered into paradise in her lifetime. 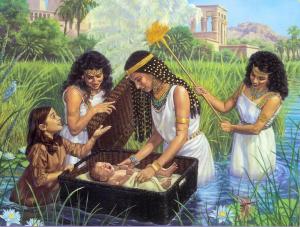 As Jews, our ancestors moved from slavery in Egypt toward freedom. They were not freed by standing still; they had to walk toward their redemption, one step at a time. For those of us today who wish to make history, we too must walk. This past Saturday was not about having a symbolic march in Washington as an end-goal. Success for this march began the day after January 21.

Jewish history is about our people’s moving from one place to another, from one reality to another. I’m ready to walk into this new chapter of American history. I choose to do it through marching forward. I hope that you will join me. There is a difference between a march and a protest: one moves forward, the other pushes back.

I look forward to the conversation,

I am one of four

I am one of four, the third of four to be exact. Being one of four is part of the way I see myself in the world, a central component of my identity and the way I have come to understand people and relationships. My mother is the oldest of three. Her place as the firstborn sibling to a younger brother and sister has shaped her sense of responsibility and the ways in which she derives satisfaction and meaning in the world.

A few weeks ago, my mother lost her younger sister. My aunt Debbie was much more than that to us all. As one of my sons phrased it, she was his grandmother-once-removed. Despite the loss, my mother will always be one of three. 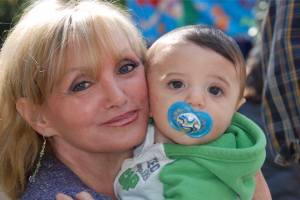 The shiva period afforded siblings and cousins the opportunity to reunite in appreciating the many blessings that come along with being part of a big family. In one particular conversation, my first cousin-once-removed (that’s my mother’s cousin) shared with me that, despite losing a younger sister decades ago, she describes herself to this day as one of four when asked about her family.

As the narrative of Joseph and his brothers builds towards its climax, Jacob, facing a famine with no end in sight, sends his ten older sons to Egypt for food. Joseph, the vizier in charge of dispensing rations, recognizes his brothers and decides to test them, accusing them of being spies. They respond in one voice: “We your servants are twelve brothers, sons of one man in Canaan; the youngest is with our father, and the one is not” (Genesis 42:13). Leaving aside the fact that the brothers exclude their sister Dinah (a topic for another blog), the brothers see themselves as twelve; it is their identity, even though their brother Joseph has been absent for years and they have passed him off as dead.

In speaking with people who have lost a child, I have learned that parents will often shape answers to questions about their families based on what is most comfortable for them in the moment, on who is asking, and on whether they feel like engaging about their loss. No matter the public response in the moment, these parents count their deceased children as part of the family, still shaping the identity of the family unit.

Such is the nature of memory in the Jewish tradition. In times both happy and sad, we strive to keep the souls of our departed loved ones as a presence in our lives—shaping our identities, defining our priorities, inspiring gratitude for the gifts we possess that can never be taken away.

May our memories of our loved ones be for a blessing to us,