Do Not Stand Idly By…

For me, this was most definitely a first: a protest chant anchored in daf gemara (a page of Talmud). Rabbi Marcus Rubenstein, of Temple Sinai, Middletown, New York had gathered two hundred Jews and allies from the Orange County Hispanic community to protest inhumane conditions for incarcerated undocumented immigrants throughout the United States.

The Babylonian Talmud, Masechet Sanhedrin 73a asks, “From where is it derived that one who sees another drowning in a river or being dragged away by a wild animal or being attacked by bandits is obligated to save him? We learn it from: ‘You shall not stand idly by the blood of your brother.’ (Vayikra 19:16).” Now Rabbi Rubenstein led us in chanting, “Lo Ta’amod” – “Do not stand.” Do not stand idly by. Do not stand for it!
With police protection and a designated area in which to meet, we stood at the edge of a field, up the road from the Orange County Detention Center which glowed eerily in the evening sunset. A volunteer protest band held our attention and kept us motivated. Rabbi Rubenstein had reached out to the Rockland community to invite us to join the protest. Four carloads of my congregants answered the call. 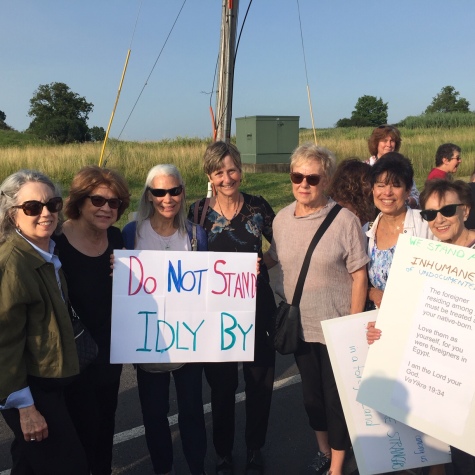 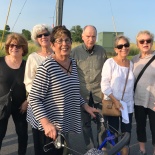 Why were we there?
For me, the answer is best provided in a famous quotation from Rabbi Abraham Joshua Heschel who asked, “What is a sin?” Heschel’s answer was, “The abuse of freedom. A failure to respond to God‘s challenge.”
This time in which we are living presents just such a challenge from God. How are we responding?
If all of us indeed are created in God’s image, then how can we bear to see children separated from parents and suffering alone? How can we read about overcrowded, hopeless conditions for incarcerated individuals? How can we hear that people are detained without representation and languish, with no clear path forward? We can no longer read the news and just turn the page with a sip of our coffee.
The inhumane treatment of undocumented immigrants in our country is not about political party. It is not about ideology. It is about basic decency.
Anonymous emails and several comments on our synagogue Facebook page focus only on the political quagmire that surrounds the questions of immigrants, asylum seekers and borders. It is easy to use immigration issues for political posturing. American leaders on both sides of the aisle have been doing that for years. Meanwhile, human beings are suffering, human beings created in the image of God. While they keep talking, people in custody are languishing in untenable conditions.
I did not go to Goshen, New York to speak against Republicans or Democrats because this is an American problem. I did not go to speak against ICE who are charged with a problem they have no power to fix because this is a mess created by our government. I did not go to speak about a brand new problem because this situation has been building for more than a decade.
Heschel said that few are guilty, but all are responsible. I feel responsible. And so I went to the protest and brought my congregation along.
I went to the protest because it is time to stop wringing our hands. It is time to stop copying and re-posting to the echo chambers of our Facebook pages, waiting to count the “likes.”
I went to the protest because we are American citizens who have rights that are also obligations. In order to change impossible situations, every individual must exercise his and her right to claim a voice in our government.
I went to the protest to tell everyone that it is time to write and call our representatives as our consciences dictate and to do so in a non-stop persevering manner. We must demand that Congress act quickly and responsibly to address the crisis in the conditions of incarcerated undocumented immigrants.
In the Torah we read, “When a stranger resides with you in your land, you shall not wrong him… You shall love them as yourself, for you were strangers in the land of Egypt.” And in case we have any doubt, this statement is punctuated with: “I am the Lord your God.” (Vayikra 19:33 – 34)

Our leaders can disagree and debate about immigrants, borders, the asylum process. While they are busy talking, however, human beings are languishing. We must write letters. We must make phone calls. We must do so without stopping. We must make a loud noise, loud enough for our elected officials to stop posturing and start acting. Our noise must be loud enough for God to know that we are responding to God’s challenge.
Rabbi Paula Mack Drill

2 responses to “Do Not Stand Idly By…”