Our last day in Israel began with a disturbing yet eye-opening incident. Our morning prayers were somewhat incomplete because we had to pray without a Torah. Why? Because the desk manager of our hotel, who made the call to request that the Torah be made available, was told that because we were not an Orthodox group, we could not have access to the Torah. Later in the day, apologies were aplenty, as the management of the hotel took responsibility for its error. They explained to us that they had more than one source for Torahs, and were happy to offer Torahs to non-orthodox groups. But for just a moment, we were reminded that Israel is still a deeply imperfect society. Unfortunately, our fight for religious pluralism and equal recognition as Jews must continue, and it is a battle in which we must be participants. Our prayer Friday morning in the courtyard of the hotel served as a statement of protest for all to see as much as it was a fulfillment of our desire to praise God in Jeruslaem. 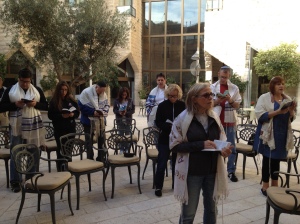 After breakfast, we headed to Yad Ezra, a local food bank, where we prepared dozens of care packages for the needy. Another eye-pening reality: one third of Israel’s children lives under the poverty line, one more fact reflecting that Israel has a long way to go before it can fully realize the Zionist dream. We worked with energy alongside some very kind-hearted and hard-working volunteers from the community. It was gratifying to see the truck load of packages that were going out to help families for the approaching Shabbat. 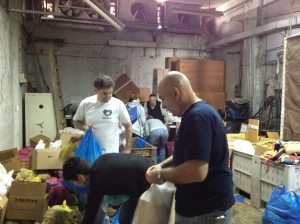 Amid such a day of recognizing that Israel is indeed a real country with real problems, our final stop was among our most rewarding. We descended to the southern end of the Western Wall as an egalitarian community. We prayed the mincha (afternoon) service together, adding prayers for our congregation, the State of Israel, and those suffering illness. We sat together among the ancient stones and offered blessings of thanksgiving for the experience we had shared, we shed a few tears, and we offered each other warm embraces. 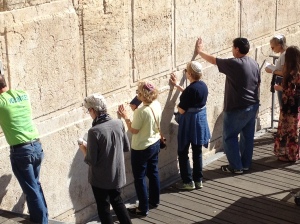 Before any of us had departed for the airport, we had already begun planning the mission for 2015. It will be celebrated as a special mission, in light of the fact that it will be our 10th consecutive annual trip. And just in case you wanted to know, the dates are November 15-20, 2015. Wanna come?
I look forward to sharing some reflections with you tomorrow morning. Shabbat shalom,
Rabbi Craig Scheff